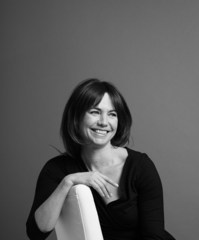 Childhood memories of Biba lip-gloss, headscarves and clouds of Opium perfume, as worn by Florrie White’s fashion alert mother, no doubt influenced her passion for working with some of today’s most style-feted and glamorous women.

Florrie is called upon by a diversity of red carpet names – Alexa Chung, Rosie Huntington Whiteley, Rosamund Pike and Emily Blunt – which is testament to her talent for perfecting both leftfield and classic looks.

Florrie saw that make-up was transformative from early on. Beauty potions mixed in her Scottish boarding school dorm were a far cry from her makeup course at Glauca Rossi in 2002, followed by a sought after position assisting Charlotte Tilbury. Florrie’s solo career kicked off in 2005.

Her creative flair shines within the folds of Vogue, i-D, Dazed & Confused, Pop & Another Magazine with photographers such as Ellen Von Unwerth, Boo George, Mel Bles and Benjamin Alexander Huseby. Not just working in editorial she has a client list which includes Mugler, Stella McCartney, Net-A-porter, M Missionni and Orla Kiely.