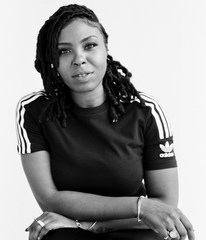 Amidat Giwa was born and raised in London and started her career early in the family run salon where she learnt her trade.

After assisting Duffy she quickly established herself as part of the new wave creatives in London.

Her work can be seen in publications such as i.D, Dazed, The Face & Vogue. Commercial clients include Dior, Glossier, Ralph Lauren, Tommy Hilfiger, Net-A-Porter & Farfetch.